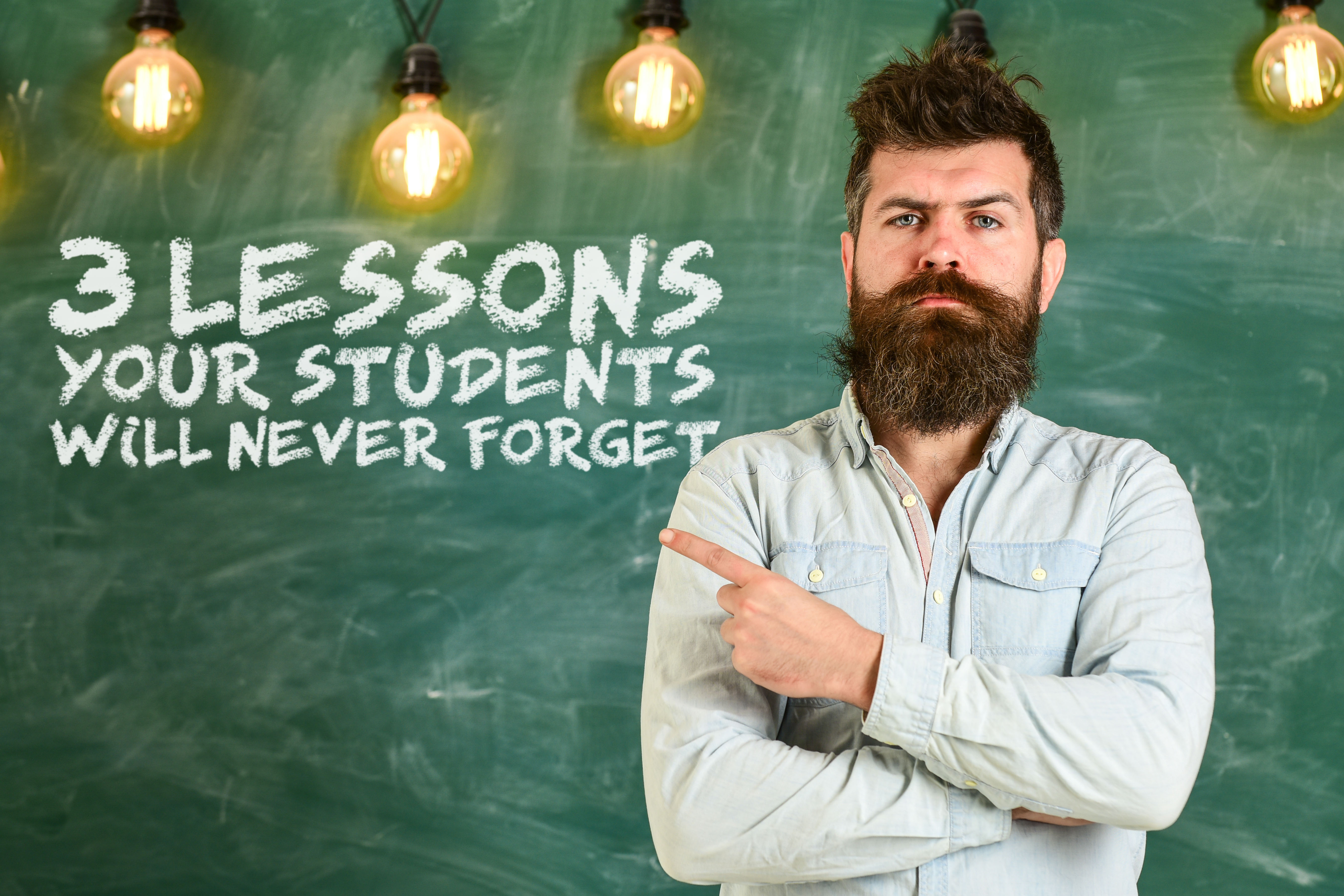 This article was originally published at SchoolRubric.com on May 2, 2019.

Teachers, admit it: we’ve all taught those lessons that flop. The instructions and goals (or objectives) aren’t clear, the activities are boring, and worst of all student interest is low. What seemed like such an engaging lesson in your head as you played it out turned out to be anything but in real life, and you’ve made a note to scrap it by jotting “never teach it again” in your lesson plan book.

But every now and again you create or borrow a lesson that has real impact. Just like when students have those “ah-ha” moments, teachers likewise have moments in their careers where they will always remember great lessons that engaged, connected, and captivated students. Some former students who are now adults might even recall these memorable lessons, keeping their former schoolwork or even expressing how the experience helped them tremendously in their future studies or even their jobs.

Over the course of my teaching career I have been fortunate enough to have planned and delivered several of these memorable lessons. Here are 3 of my proudest lessons that I still remember to this day and talk about with my former students.

Some great lessons you create. Some you borrow. And others you inherit. When I started teaching at the American School in Rio de Janeiro, one of the first question my 8th English students asked me was “when are we going to be doing the Literature Trials?” I had never even heard of literature trials, but parents, colleagues and administrators wanted to know when I was going to do “The Trials.” During the first week in my new teaching role, the secretary helped me reserve the auditorium before I even knew what “The Trials” were.

The Literature Trials are an event, a dramatization and theatrical performance. The gist of the trials is that a character or characters from a novel are put on trial for a crime they did or didn’t commit. The famous pig Napoleon from George Orwell’s masterpiece Animal Farm is on trial for abuse of power. Lennie from John Steinbeck’s novel Of Mice and Men is on trial for the killing of Curly’s wife, and so on.

After reading various novels throughout the year, the students were put into different teams: the defense team or prosecution teams. The teams would prepare and on the day of the trial, battle each other in the courtroom. The students had various roles within their team: creative directors, characters from the novel, and lawyers. For weeks the students would scour the novel’s look for evidence to help support the arguments to either prove a characters innocence or guilt.

On the day of the trials, the creative directors prepared the costumes and exhibits they designed and created. The lawyers rehearsed their opening and closing statements based on script they created and evidence they gathered from the novels. The different characters from the novels practiced their rehearsed lines from their teams and strengthened their arguments against possible questions from the opposing team. Parents packed the auditorium to watch their kids and their peers. Teachers and administrators made up the five-person panel jury and judges podium. The atmosphere was electric.

Each trial lasted an hour and a half with it ending with the judge read the jury’s verdict. Team’s celebrated and complained depending on the outcome. But everyone had fun, and no one ever forgot the stories told in those books.

Below you will find an example of a student written introduction to the trial from the novel Speak:

The trial introduction by Namanh Kapur (the Baliff from the 2012 trial of Andy Evans from the novel Speak):

What would you do if you found yourself trapped in a situation that you had absolutely no control over? The moment you’re living takes control over your body and your mind and tension consumes your thoughts. You cannot speak, you cannot move, you are paralyzed as a statue. “In my head, my voice is as clear as a bell: ‘No I don’t want to!’ But I can’t spit it out” (Anderson, 135). “Speak” by Laurie Halse Anderson is a remarkable novel that gets us involved in the story as if we were with the protagonist at all times. The book is a first person account of a young girl named Melinda Sordino. It talks about how her life used to be – happy, joyful, and unworried – and how it suddenly changed completely in one single night – full of preoccupations, melancholy, and fear. What exactly happened nobody knows… what would you say? It’s up to you to decide.

The Academy Awards of Poetry

Do your students cringe when you tell them you are going to teach them poetry? My students did. That is until I started doing poetry videos and held the Academy Awards of Poetry.

I found that poetry is a powerful way to learn about my students and teach them important elements of writing, such as figurative language and imagery. I began all my English classes with poetry. My favorite way to start poetry was by introducing my students to my favorite poetry song by Rhythm, Rhyme, Results called Figurative Language. It’s a cringe-worthy rap song that teaches figurative language. When I initially presented the song to students, many of them rolled their eyes and laughed, but they never forgot the lyrics or the different types of figurative language mentioned in the song. Years later I met up with some old 8th grade students who were on college spring break in Portugal and they still remembered our poetry unit, and in particular, our now-famous song.

After discussing elements of poetry, the students create poems using figurative language and imagery about anything they wanted. They then turned their poems into videos. They analyzed lyrics in music and different poems we read in class. They created drafts of different poems and some students turned their poems into songs. Heck I even created embarrassing rap songs using poetry elements to help inspire them: My Name is Mr. Sagare.

When the poems and videos were done, we screened the poems in the auditorium and voted anonymously on the winners.  These poems taught the students a powerful lesson in writing. And their poems taught me powerful things about them. Below are a few of my favorites from my students:The

It’s no surprise that two of my memorable lessons incorporate videos. Videos have images that leave lasting impacts. For the biography videos, the focus was on non-fiction writing and revisions.

Students chose someone that they were interested in and began to create a story for this person. Students chose singers, actors, icons, historical figures and even their parents. Below is an excerpt from a biography of one of my students in 8th grade:

Triple jump is one of the toughest sports for your body and requires a lot of training that causes many injuries. Sigurd Njerve was a triple jumper from the 90s, despite his big injury in 1997 that made him quit, he was one of the best Norwegian triple jumpers ever. Sigurd was born in Trondheim, Norway in 1971 and he is still alive now. He attended the 1996 Summer Olympics and been the first Norwegian to jump over seventeen meters in triple jump. He was a tall athlete, according to himself, he was 1.80 meters tall when he was fifteen. At his top level he was 2.07 meters and he still is.

For a month the students read biographies and watched biography clips and they edited, revised and perfected their writing. All students were required to make ⅓ changes to their prose. In the end they had the choice to use the revisions or scrap them.

When they had read, marked and given feedback, the students recorded their voices and put their voices over images and added text to help tell their stories. Here are a few of the biographies that the students created:

On the day the biographies were due, students brought popcorn and treats and gave constructive feedback to their peers. It was fun for everyone to learn about people that have impacted their lives or that they simply found interesting or wanted to learn about.

Although I am not in the classroom anymore, I always reflect fondly on my time as a teacher and miss the day-to-day creations and interactions with students. I keep in touch with many of my former students, most of whom are now either studying in university or working, and consider them friends. We often talk about the most memorable lessons when I was their teacher and I am hopeful that other educators can perhaps learn from my experience.